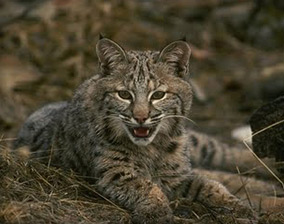 Bobcats are elusive and nocturnal, so humans rarely spot them. Although they are seldom seen, they roam throughout much of North America and adapt well to such diverse habitats as forests, swamps, deserts, and even suburban areas. They have been known to feed on small animals like birds, squirrels, rodents, and even pets. Because they sometimes kill chickens, domestic turkeys, or livestock. Many ranchers and farmers regard them as destructive pests.

Bobcats are solitary animals. Females choose a secluded den to raise a litter of one to six young kittens, which will remain with their mother for 9 to 12 months. During this time they will learn to hunt before setting out on their own.

Critter Gitters is the best company to call to remove bobcats quickly, humanely, and professionally.