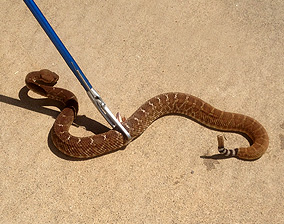 Due to the beautiful San Diego climate, snakes are abundant across San Diego county and its become commonplace for their paths to cross with humans.

Many San Diego residents turn to Critter Gitters for humane snake removal at 619-820-8993.

What To Do When Encountering A Snake

It’s is important to remember that snakes are not usually aggressive, and most of them are non-venomous. If you stay away from them, they will stay away from you. When you see a snake make sure to keep any animals and children away from the snake, and contact a professional to take care of the problem professionally. Our experts are fully qualified and available at 619-820-8993 24 hours a day, 7 days a week to take care of your snake removal needs properly and without harming the snake.

How To Reduce Possibility Of Snakes

Rattlesnakes normally avoid open areas where predators can spot them easily. Rattlesnakes will sun bath in open areas but spend a majority of their time tucked away in tight spaces that are in the shade. Try to make sure that all large branches and or logs are removed from your property snakes like to stay next to these larger pieces of debris. Also try to avoid having large rocks on your property that have considerable overhang. Snakes enjoy the shade under these rocks because it provides shelter from the elements and predators as well. We recommend that you try to close off any areas under your porch or home so they are not able to use your home as refuge. During the colder season snakes tend to hibernate in dens which can house one or even dozens of snakes. Once a snake has established a den on or near your property they will continue to return year after year. Snakes offspring may also return to this same den. If you notice a snake on your property, it is best to have it removed quickly so you can be sure that they will not return again.

While almost all native snakes to the San Diego area are not harmful to people, the Rattlesnake is a different story. Southern California is home to seven species of rattlesnakes, while San Diego County is home to four varieties: 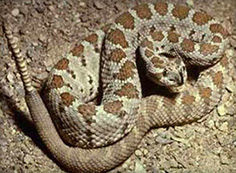 How Do I Recognize a Rattlesnake?

The rattlesnake’s most prominent features include:

Rattlesnakes are commonly known for their trademark rattle, but it may be missing or otherwise broken off. They are able to grow a new rattle segment each time they shed their skin, which is normally once every four months or 3-4 times per year. You can get an idea for the snake’s age this way but only if they haven’t loss their rattle to normal wear and tear. Depending on the amount of food a snake gets, they might shed their skin less per year which is why this would be a rough estimate at best.

To be able to identify a rattlesnake from its unique features, this usually requires you to get too close to the snake. This is why we recommend you avoid any strange snake and instead contact a professional. Critter Gitters removes snakes immediately upon call; safely, and professionally.