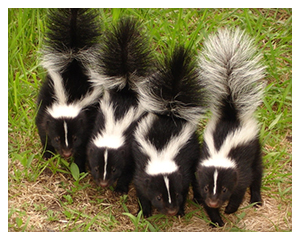 Need skunk removal North Park San Diego residents? North Park San Diego is one of the most culturally diverse and landscape diverse areas of San Diego. North Park has a lot of homes that are predominantly close in proximity. However it also has vast open spaces where animals can thrive. The canyons throughout the greater North Park area like Switzer, Juniper, and Manzanita are great areas for animals to thrive. These same canyons have homes that line the canyons, most of which have the rear of the home facing the canyon. Water runoff goes into the canyons and does not evaporate as quickly. This allows wild animals such as skunks to have a place to replenish their thirst. There is also a lot of brush and areas for animals to hide in as well within these canyons. Animals like skunks who are primarily nocturnal, like a place to hide where they can stay out of the heat during the hot daytime hours. Essentially these canyons are an ideal habitat for wildlife like skunks. However there are a large number of homes and people that surround the canyons. This makes skunk and human interaction nearly impossible to avoid in the North Park area. Keep in mind that North Park is also right next to Balboa Park. Balboa Park is as great for the skunk population as it is the human population. There is a lot of room to roam in Balboa Park and particularly at night time skunks can move about freely without much interference. There are always little goodies left behind from people throughout the park from their picnics and outings. These “leftovers” are exactly what skunks love.

The awesome people of North Park are similar to us, they are animal lovers. However they typically stick to keeping dogs and cats as pets and do not keep skunks as pets. The large animal population in North Park can also attract unwanted attention from skunks. Are you an animal lover that likes to leave food out for a stray or neighbors cat? While your intentions may be good, the outcome may be bad. Leaving food, even a small portion, outside will undoubtedly attract the attention of a skunk. While it may seem harmless to have a skunk eat some of the food you leave out, it can cause serious health issues for other animals and even you. Skunks are one of the biggest carriers of the rabies within the continental United States. If you leave food out for a stray or a neighbors pet and they come into contact with skunk saliva there is a high probability that the animal may become infected with the rabies virus. If you must leave food outside for an animal you should only do it while supervising. A skunk is more likely to leave under your porch. Many people do not know they have a skunk under their porch until it is too late. Skunks like porches because they protect them from the harsh heat and they are safe from predators during the daytime since most predators of skunks are much more likely to avoid human contact.

Critter Gitters is your skunk removal expert North Park residents. We care about animals too and will only use safe skunk removal processes that will not hurt the skunks. We will remove them a safe distance away from your home so they will not return. We release skunks in a habitat where they can thrive and will less liekyl to have human interaction. We hope you will call us for all of your skunk removal needs North Park. You can see more about our company by visiting our homepage.